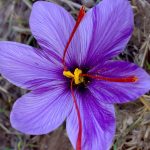 (NaturalHealth365) Saffron, an ancient cooking spice and staple of the Mediterranean diet, has also played an important role in traditional and herbal healing systems, including Ayurveda and Chinese Traditional Medicine.  On top of that, exciting research highlights saffron’s ability to attack cancer cells on multiple fronts – at every stage of the disease.

In fact, scientists are crediting saffron with the potential to not only prevent, but even reverse, a variety of aggressive cancers. Keep reading to discover the five distinct ways saffron fights cancer.

The carotenoids in saffron stop the growth of cancer

With the growing realization that conventional cancer-fighting drugs not only feature devastating side effects but may themselves cause secondary cancers, many researchers are focusing on finding natural chemopreventive substances – in order to stop cancer from taking hold in the first place.

Saffron, made from the flowers of the Crocus sativa plant, contains three carotenoids – or antioxidant plant pigments – that have the potential to launch a preemptive strike against cancer.

Animal and cell studies have shown that crocetin, crocin and safranal in saffron inhibit the triggers – such as environmental toxins, oxidative damage from free radicals, radiation, inflammation and viruses – that start the carcinogenic process. By actively protecting cell DNA from damage and mutation, saffron helps to defuse the risk posed by these initiators of cancer, stopping the growth of cancer before it even begins.

Saffron extracts cause aggressive cancer cells to kill themselves

The term apoptosis refers to the programmed cell death that ordinarily controls and regulates cell growth. Cancer cells lose their vulnerability to apoptosis, giving them their devastating ability to grow unchecked.

Crocetin, crocin and safranal can all reverse this process by producing apoptosis, or cell suicide, in cancer cells – even in the case of aggressive cancers of the liver, lungs and stomach.

An animal study published in Hepatology showed that a two-week pretreatment course of saffron caused apoptosis, blocked inflammation and reduced the incidence and size of cancerous nodules of the liver, which had been developed as a result of the cancer-producing chemical diethylnitrosamine – a toxin found in such everyday substances as tobacco smoke, gasoline and even processed foods.

In a world abounding with carcinogens, it’s easy to see why researchers believe saffron can be a powerful and protective ally.

But saffron has additional cancer-fighting benefits to offer.

In addition to blocking cancer triggers and creating apoptosis, saffron inhibits the production of matrix metalloproteinase, or MMP, one of the substances that cancer cells use to destroy the protein matrix between cells in healthy tissue, an important factor in the spread of cancer throughout the body.

According to researchers, crocetin from saffron was found to decrease breast cancer cells’ ability to produce MMP – reducing their invasiveness and successfully preventing them from penetrating and invading nearby healthy tissues.  In fact, the team noted that crocetin “greatly attenuated” production of MMP, while also reducing levels of gelatinase – another enzyme that plays a central role in cancer invasiveness and tumor progression.

Crocetin, crocin and safranal can suppress angiogenesis – the process by which tumors add new blood vessels. Researchers believe that they achieve this by reducing levels of a vital signaling molecule that tumors produce in order to form new blood supplies.

In this way, saffron helps to deprives tumor masses of blood, oxygen and nutrients.

Crocetin has produced dramatic regression of pancreatic tumors – even after the tumors were already detectable – thereby giving rise to hope that saffron can reverse cancer growth.

Scientists have long known that inflammation plays a key role in the development of cancer. Saffron’s powerful anti-inflammatory effects give it yet another weapon in its cancer-fighting arsenal.

In fact, researchers identified saffron’s inflammation-blocking properties as a key factor in the encouraging results of many cell and animal studies.

Finally, in a study published in Experimental Oncology, saffron caused a stunning reduction of proliferation in colon cancer cells – slashing the rate to 2.8 percent of the rate of untreated cells. And, it accomplished this without harming healthy cells.

One of the drawbacks of chemotherapy is that it can cause chemical changes in DNA that actually activate cancer genes and induce cancer-causing mutations. Not only do saffron’s carotenoids present no threat to healthy cells, they offer potent protection against this type of damage.

In an animal study published in Human and Experimental Toxicology, mice were given saffron for five days before being given cisplatin, cyclophosphamide and mitomycin-C – all common anti-tumor drugs. Researchers found that saffron significantly inhibited DNA damage; specifically, it prevented breakage in fragile DNA strands.

Natural, safe and non-toxic, saffron not only fights cancer on multiple fronts and at multiple stages, but carries none of the risk of toxic conventional cancer treatments. It is easy to see why researchers are intrigued by saffron as a promising treatment for a deadly disease.

NaturalHealth365 is a premium source of trending and popular health-related news, science, testimony & research articles on the most up to date and relevant natural health information. The Food & Nutrition articles found herein are meant to inform and advise our site visitors on eating healthy, nutritious foods and safely using supplements and vitamins to achieve optimal health.

Join thousands of daily visitors staying informed and involved on Natural Health 365! We seek out scientific solutions with proven results and it is our mission to keep you up to date on the latest information! Articles range in topic from the causes of cancer, cancer-fighting foods, to natural cancer treatments, cancer prevention & specific research-backed information on Breast Cancer, Prostate Cancer, etc. We also write extensively on Heart Disease because it is accounts for 25% of all deaths in the United States – that’s one in four! We take an in depth look at the symptoms of heart disease, the causes and treatment of high blood pressure, benefits of CoQ10 and healthy, natural ways to unclog arteries.

Food News is one of our major post categories on www.naturalhealth365.com and contains over 350 articles that cover a wide range of subjects; including but not limited to…

In addition to publishing articles on cutting edge natural cancer treatments and heart disease prevention, we also aim to connect healthy lifestyles, diets and balanced consumption of dietary supplements to long-lasting cancer-free health and adding happy years to your life. For example, did you know that the amount of emotional stress in your life can contribute to your risk of cancer? Or that raw, expeller-pressed olive oil has cancer fighting qualities? Perhaps you didn’t know that Fresh Organic Produce has been found to have higher concentrations of key, cancer-fighting anti-oxidants and vitamins than conventional produce? You can find all of that information and more right here on Natural Health 365.

Stop cancer cell growth in its tracks with NAC, according to exciting research

(NaturalHealth365) We all want to prevent cancer cell growth.  But, as you’ll END_OF_DOCUMENT_TOKEN_TO_BE_REPLACED

Leafy greens linked to a LOWER risk of macular degeneration

(NaturalHealth365) Macular degeneration, a leading cause of vision loss in Americans 60 END_OF_DOCUMENT_TOKEN_TO_BE_REPLACED